Harmondsworth is widely regarded as one of the finest timber-framed barns in England. Built from 1426, on the site of earlier buildings, the present barn is a Grade 1 listed and scheduled ancient monument which has survived virtually unaltered. It is a 12 bayed aisled structure measuring 192 feet in length, spanned by tie beams with pairs of arched braces.

McCurdy & Co. were brought in by the new site owners, Wiltshire plc, to carry out a full archaeological survey, record drawings and a condition analysis before carrying out a programme of careful repairs.

Peter McCurdy’s survey work revealed aspects of craftmanship and methodology of the medieval carpenters not widely known. He discovered a number of fascinating errors made in the original setting out of the timber frames and joints and in the fabrication and positioning of the door openings. There was also intriguing archaeological evidence of the methods used to prefabricate the enormous trusses and frames and the carpenters’ scribing lines, marks and numbers for identifying individual timbers. The barn, a stone’s throw from Heathrow Airport, has been successfully conserved for future generations to enjoy. 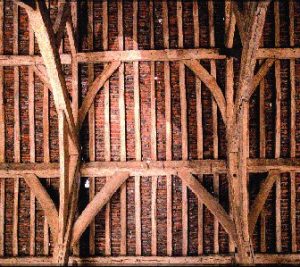