Pilton is one of four surviving barns originally attached to Glastonbury Abbey. The existing structure dates back to the 14th century although Pilton is mentioned in the Domesday Book of 1086. After the Reformation it became little more than a working farm building but remained an important example of a medieval “tithe” barn. In 1963 it was struck by lightning and the entire roof, then thatched, was completely destroyed leaving just the four walls standing. 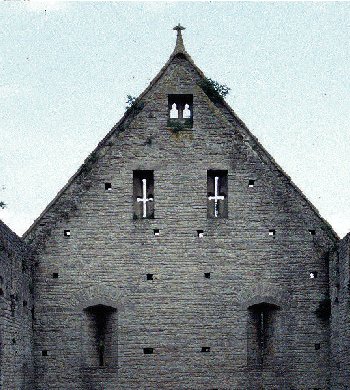 McCurdy & Co were brought in by the Pilton Barn Trust as specialist advisors and principle contractors. They were responsible for the research, design and construction of the new roof, which helped to restore the barn to its original condition 600 years ago.

The reconstruction work was being funded by English Heritage through a grant from the Lottery Fund. Large curved timber beams, or crucks, and other structural timbers which make up the complex roof structure were cut and shaped from green English oak in McCurdy’s Berkshire workshops for erection on site.

Using a combination of traditional carpentry techniques and modern technology the project used extensive research and analysis into the Barn’s history to authentically reproduce the original roof structure. Now restored, this important ancient monument will be preserved for the enjoyment of the public and for use by the local community.